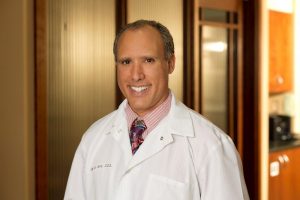 A third generation Virginia Tech Hokie, Dr. Guy Levy joined his father, Dr. Mayer Levy, in practice in 1987. Dr. Levy is an honors graduate from the Georgetown University School of Dentistry and has been recognized with many awards, including induction into the Omicron Kappa Upsilon dental honor society. Dr. Levy has completed hundreds of hours of advanced study at the prestigious Pankey Institute for Advanced Dental Study.

Active in their communities, Dr. Levy and his wife, Robin, hold leadership positions in a range of civic, religious and charitable organizations. They have two adult children, Clare and Frankie. Today, Dr. Mayer Levy remains “on deck” to help whenever called. 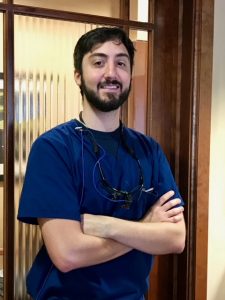 The newest member of the Levy Dental Group practice. Dr. George Michos was born in Reston, Virginia. He grew up in rural Virginia, in the small town of Urbanna, located on the Rappahannock River. He later went on to attend the University of Virginia, where he received his degree in biology. He graduated with distinction in three and a half years. After his time in Charlottesville, he moved to Richmond to attend the Virginia Commonwealth School of Dentistry (formerly known as the Medical College of Virginia or MCV) where he received his Doctor of Dental Surgery. His favorite hobby is watching or playing basketball.

When you walk through the doors of Levy Dental Group you will meet a friendly, thorough, experienced and detail-oriented dental team. Our team members will do everything possible to support you and your smile and help our dentists deliver top-quality dental care in Yorktown, Virginia. You can meet our team members below, and we invite you to call 757-877-9281 for your appointment.

Robin has been married to Dr. Guy since 1986. She has worked part-time in the front office for many years. She took over as the business manager in September 2006 when Dr. Guy’s mom, Susan, retired.

Julie has worked in the dental field since 1983 and has been with Dr. Levy since June 2010. She enjoys spending time with her husband, her two girls and their two dogs. She loves to help our patients understand their treatment and reach their goals for healthy and beautiful smiles!

Whitney started with Dr. Levy in 2007, right out of high school. She loves spending time with her husband and their three kids. She enjoys meeting new people and giving our patients an amazing experience at our office.

Growing up in the Tabb area, Elysse graduated from Summit Christian Academy. Elysse has always had a passion for working directly with people, which led her to pursue a career in dental hygiene. From high school, Elysse went to Thomas Nelson Community College and transferred to Old Dominion University where she earned her Bachelor of Science in dental hygiene with a minor in community health.

In her free time, Elysse loves to spend time with her husband, Leonard, and stepdaughter, Karina. They like to go to movies and spend time together.

As a registered dental hygienist, Elysse appreciates the specialized care and the variety of services that Levy Dental Group offers to patients. She is looking forward to meeting you!

Erin is from Dumfries, Virginia, but moved to the Hampton Roads area to pursue her degree in dental hygiene. She graduated from Old Dominion University in 2017 with a Bachelor of Science in dental hygiene and a minor in psychology. Erin enjoys spending time with her friends, family and her fiancé, Matt. Her favorite part about being a dental hygienist is getting to meet new people every day.

Sara earned her degree in dental hygiene in 2017. She enjoys spending time with her finance and two dogs. She loves building relationships with her patients and educating them about their oral hygiene.

Autumn graduated from Medical Careers Institute (MCI) in 2007. Autumn has been a dental assistant since 2008. She enjoys going to the movies, spending most of the summer at the beach and quality time with her friends and family. She loves assisting because she values helping patients have the best experience possible. She is a perfectionist when it comes to quality for patient satisfaction. She also loves cats!

Jennifer is a native of Poquoson and a graduate of New Horizons Regional Education Center dental assisting program in 2003. Jennifer is happily married to her husband, Jack. They have five children, two dogs and two cats. She loves spending time with her family and watching movies. Her favorite part of being a dental assistant is getting to know the patients and helping them feel comfortable during their visits and helping them learn about their oral health.